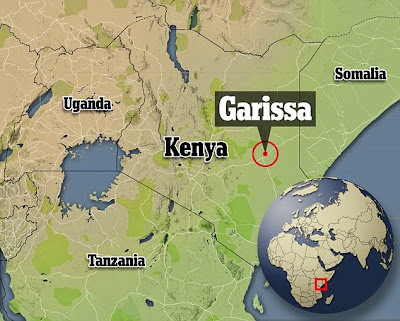 With grim predictability, the Easter weekend of 2015 brings annual Islamic attacks against Christians in the Middle East and Africa. This year it started in Kenya.

Kenyan authorities have imposed a curfew in the northeast part of that country a day after radical Muslims slaughtered at least 148 Christian university students.

The Muslim terror group Al-Shabab has claimed responsibility for the horrific attack.

Early Thursday five shooters from the Somali-based al-Shabaab terrorist organization swept through Garissa University which is located near the Kenyan town of Garissa, shooting Christian students. They knew who to kill because they ordered students to recite an Islamic prayer. Those who could were spared. Those who could not were martyred.

"It was around 5 a.m. We wake up early in the morning for the morning prayers. We tried to turn on the lights, but they were not working," one survivor recalled.

Eye witnesses say the terrorists went from room to room asking students whether they were Christian or Muslim. Those who identified themselves as Christian were murdered on the spot without mercy.

Survivors of the Garissa attack spoke of merciless executions by the attackers, who stalked classrooms and dormitories hunting for non-Muslim students.

Reuben Mwavita, 21, a student, said he saw three female students kneeling in front of the gunmen, begging for mercy.

"The mistake they made was to say 'Jesus, please save us', because that is when they were immediately shot," Mwavita said.

It appears the gunmen had extensive knowledge of the campus layout, even targeting an area often used by Christians for prayer.

Many of those killed were reportedly beheaded after being asked to recite verses from the Koran. The siege lasted 13 hours before police finally stormed the university. The gunmen died when they detonated their suicide vests.

"On my own behalf and on behalf of my government, I extend condolences to the families of those who have perished in this attack," Kenya President Uhuru Kenyatta said.

Garissa is close to the Somali border. The town is mainly Muslim but many Christians attend the university.

The military has stepped up security as a dusk-to-dawn curfew has been ordered in Garissa and three nearby counties.

There is now a $215,000 reward for the man identified by Kenyan authorities as the mastermind behind the slaughter.

Since 2008, Kenya has been at war with Al-Shabab. The group has launched several attacks on Kenyan soil, but Thursday's was by far the deadliest.

The killings of these Christian students reveals, once again, the harshest reality of the chaos spreading throughout these regions. The reality is that multiple jihadist armies, invoking Islam, are engaged in a planned strategy, not merely of territorial aggrandizement, but of extermination. 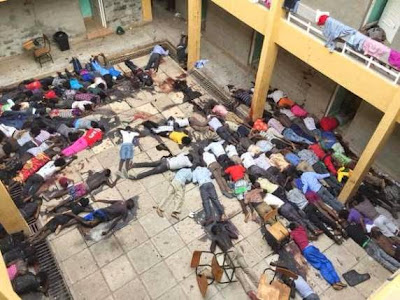 ____________________________
Please pray as the nation of Kenya mourns this horrible atrocity. Pray for the Holy Spirit to comfort all who mourn. Pray that God gives Kenya the garment of praise for the spirit of heaviness. Pray especially for the futures of all the surviving students. Most of all, pray that the blood of the 148 Christian martyrs was not poured-out in vain, but that it is the precious seed that springs up to a great African revival like nothing the world has ever seen! Pray all this in the name of our risen Lord and Savior Jesus Christ! Amen.