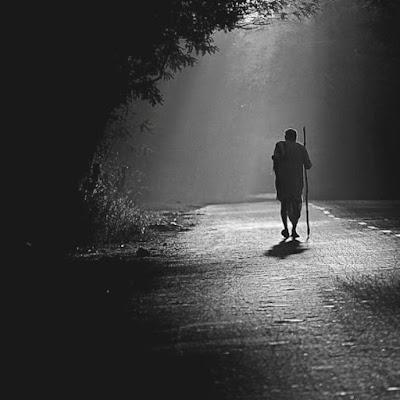 As a man enters into the deeper pools of the Christ-life he enters into the process of self-conquest, it is there that he finds a conquest which is far different than any other conquest he has pursued up to that point. Previously, such a man has endeavored to overcome, transform, and simplify his outward appetites. But now he begins to focus on his interior life. It is one thing to command his emotions, but it becomes another thing entirely to command his inner most thoughts and bring them into submission to Christ. Only then will Christ become the fullness of his thought life, at which point he perceives what is the true substance of an imperishable Principle. He sees that the righteousness for which he has been searching is never-changing and fixed, that it cannot respond with any capitulation or accommodation to men, but that a man must submit to it and obey it. It calls for an unwavering line of conduct apart from all consideration of loss or gain, of reward or punishment. In reality it consists of full and complete self-abandonment to all sins of self-interest, desire, and opinion, upon which he once placed the whole of his identity. Only then can such a man begin to live a blameless life of perfect love towards all. Such a life is spiritually fixed and mature; it is without turning, compromise, or preconceived qualifications, and it exacts a blameless conduct out of the man as he stands among fellow men. It brings forth, without question, a life of peace that is the direct antithesis of a worldly life. In fact, it is then that such a man has overcome the world.
~ Fr. Richard+
____________________
Philippians 4:8-9
Finally, brethren, whatsoever things are true, whatsoever things are honest, whatsoever things are just, whatsoever things are pure, whatsoever things are lovely, whatsoever things are of good report; if there be any virtue, and if there be any praise, think on these things. Those things, which ye have both learned, and received, and heard, and seen in me, do: and the God of peace shall be with you.
Posted by Fr. Richard L. Jones at 3:45 PM No comments: