Voicemail Testimony After Casting Out Demons From Woman's Home

WHAT'S WRONG WITH OUR GOSPEL?

Paul of Tarsus used the phrase “my gospel” numerous times in his letters. He was referring to the message that he preached.

While there’s nothing wrong with the gospel, I do have concerns about what’s missing from our gospel—that is, the gospel that many Christians are hearing today.

N.T. Wright wrote a great book recently (Surprised by Hope) that went into various aspects of the gospel that are missing from our gospel. Namely, the Christian’s true hope.

Of course, your mileage may vary. And if it does, that’s great. But a large portion of the Christian world today has neglected a number of vital elements of the gospel. Here are just three of them:

1) The reality of an indwelling Lord.

There’s a great deal of emphasis today on the need to be like Christ. To imitate His earthly life. This is commonly tied into and often defined as “discipleship.”

I believe that this emphasis is correct, but it’s not complete.

Christian leaders have been telling God’s people that they must “be like Christ” for the last 600 years (at least). The well-known book by Thomas a Kempis, The Imitation of Christ, was published around 1418.

Some 480 years later, Charles M. Sheldon’s book, In His Steps: What Would Jesus Do was published. Ever since then, Christians have been trying to “do what Jesus did.”

I believe the reason why this “gospel” hasn’t worked is because it’s asking the wrong question. The question is not “what would Jesus do?” It’s “what is Jesus Christ doing through me … and through us?”

Unlike all other religions, the founder of our faith is still alive.

He lives inside of all who have repented and believed upon Him.

As Christians, we have been called to live by His indwelling life. And we can.

"As the living Father has sent Me and I live by the Father, so He who partakes of Me shall live by Me."

A large part of the gospel is to be awakened to an indwelling Christ — not as a doctrine or theology, but as a living, breathing Person whose life we can live by.

Paul’s central message was “Not I, but Christ” and “Christ in you, the hope of glory.” (See Romans 8, Colossians 1, Galatians 2, and John 14-17, where Jesus Himself spoke about His indwelling just before His death.)

Imitating Jesus, therefore, is not a matter of trying to mimic the outward things He did (as if we can actually do that in our own energy).

It’s rather a matter of imitating the way He lived His life in order to produce that fruit. It’s to get in touch with the engine of His outward activities, and to “do likewise.”

This puts us on a collision course with the matter of living by an indwelling Lord.

2) The Greatness of Christ.

Some Christian groups present a Christ of Romans and Galatians. He’s come to save the lost.

Other Christian groups present the Christ of the Gospels. His earthly life must be imitated.

Some Christian groups present the Christ of the cross. His death is emphasized above all else.

Other Christian groups present the Christ of Easter. His resurrection is emphasized above all else.

All of the above emphasize the Christ of time.

But there is the Christ who exists before time.

And there is the Christ of the present and the future.

All are the same Christ.

All of creation was created in the Son of God before time, and He was made the Firstborn of all creation. Further, God the Father chose all of His people in Christ before time (Colossians 1; Ephesians 1).

After His resurrection, the Lord Jesus Christ sat at the right hand of God as Lord of heaven and earth. Today, He intercedes for us, acts as our High Priest, loves us as our Shepherd, and lives out His indwelling life in and through us.

As the Alpha and Omega, time is within Him. Jesus Christ knows no beginning or end. All of creation is moving toward Christ being Head over all, in all, through all, to all, until He is All and All.

In the end, all things will be summed up in this incredible Christ (Colossians 1; Ephesians 1).

And this is the Christ that has taken up residence within you and me.

With few exceptions, our gospel begins with Genesis 3 rather than Genesis 1.

Our starting point is the fall of humanity.

The result: Everything is framed around God’s redemptive mission. It’s all about saving a lost world.

But what if we began, not with the needs of humans, but with the intent and purpose of God? What if we took as our point of departure, not the earth after the fall, but the eternal activity in God Himself before the constraints of physical time?

In other words, what if we built our theology on Ephesians and Colossians and allowed the other NT books to follow suit?

Why Ephesians and Colossians? Because these two letters give us the clearest look at Paul’s gospel with which Christ commissioned him. These two letters begin, not with the needs of postfall humans, but with God’s timeless purpose before creation. They also introduce us to Christ in His preincarnate state.

I assert that if we did this, the Gospels and the rest of the NT (let alone the entire OT), would fall into a very different place for us.

The Gospels are not the beginning point of the Christian faith. Neither is the OT. Both give us the middle of the story. Ephesians, Colossians, and the gospel of John are the introduction and the opening chapters of that story. Those writings give us a glimpse into Christ before time and what His original mission is all about.

In this regard, we can liken the gospel that many of us have heard to watching Star Wars Episodes IV, V, and VI first (which is the way they came out in the theaters).

But for us to really understand what’s going on in that drama, we must begin at the right place with Episodes I, II, and III.

Consider this fact. Human beings didn’t come into this world in need of salvation. There was a purpose in God that came before the fall, and He has never let go of it.

Without an understanding of God’s ageless purpose, our good deeds can be likened to playing an instrument on our own as opposed to playing with others as part of an orchestra that is performing one breathtaking song.

What an amazing Lord we have.

I hope that in time these three aspects of the gospel will become part of our gospel.

Frank’s new book, From Eternity to Here, is on discount at Parable.com for a limited time. For more information, including reader reviews and endorsements, go to FromEternitytoHere.org
Posted by Fr. Richard L. Jones at 12:53 AM No comments: 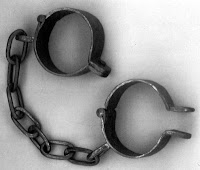 The apostle Paul often referred to himself as a bondservant of the Lord Jesus Christ. He was a slave (doulos) of Christ, a slave to righteousness, and no longer a slave to sin. He knew that everything pertaining to Life and Godliness flowed out from the One who purchased him and owned him! Slaves must totally depend on the one who owns them for their provision. We who believe are all slaves to Christ and we must look to Him as our provider. He is our life and all provision flows from Him.