350th Anniversary of The Book of Common Prayer ~ The Anglican Way 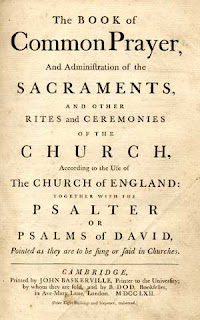 The Anglican Way
by Gerald Bray

The English Reformation produced the Book of Common Prayer and the Thirty-nine Articles of Religion as its foundational documents. Both represent the more Reformed (as opposed to Lutheran) phase of the English reformation, though they are closer to patristic and medieval traditions than most Reformed documents are.

Archbishop Cranmer believed that he had to reform the worship, doctrine, and discipline of the church. The Prayer Book represents reformed worship, and the Articles contain reformed doctrine. Yet Cranmer’s reformed discipline failed to gain parliamentary approval, and that failure was a factor that led to the rise of puritanism.

The first Book of Common Prayer appeared in 1549. It contained services for daily worship, both morning and evening, and forms for the administration of baptism and the Lord’s Supper, along with other ceremonies that were used less often. The services were full of biblical phrases and imagery, and English people absorbed a considerable knowledge of Scripture from the Prayer Book, which was often repeated and easily memorized. The most important service was the one for the Lord’s Supper. Cranmer used traditional medieval English liturgies like the Sarum rite (“Sarum” is Latin for the town of Salisbury, in southern England), a liturgy drawn from Norman, Anglo-Saxon, and Roman traditions in the eleventh century. Cranmer restructured the old liturgies, however, in order to bring out the centrality of justification by faith alone. The communicant’s attention was directed away from the consecration of the bread and wine, which recalled the Roman Catholic doctrine of transubstantiation, and refocused on his spiritual state, in line with Reformed teaching.

In order to reach the widest audience with the least resistance, Cranmer was careful not to break too obviously with tradition, and although the doctrines of the Reformers were clearly stated in the Prayer Book, traditionalist Catholics could still use the new rites. Cranmer had to move on, and in 1552, with some help from Martin Bucer and John Knox, he brought out a much more radically Protestant Prayer Book. What this meant can be seen in the revision of the words used in the administration of Holy Communion. In 1549, the minister said: “The body of our Lord Jesus Christ which was given for thee preserve thy body and soul unto everlasting life.” This did not make it clear whether the bread being given to the recipient was transubstantiated or not. But in 1552 the words were changed to: “Take and eat this in remembrance that Christ died for thee, and feed on him in thy heart by faith, with thanksgiving.” Here what the communicant received was bread, and he was told to reflect on the presence of Christ in his heart.

In 1559, the 1552 Prayer Book was brought back after Queen Mary banned it, with some modifications. In the example given above, both sentences were included, making the words of administration very long. This was a concession to traditionalist sentiment, but it was Protestantism that predominated, and when the Prayer Book was revised again in 1662 this was reinforced. American readers need to realize that, although the 1662 Prayer Book is the classic Anglican form that is still used in England, it was replaced in the United States (in 1786) by a form that was closer to the 1549 book. As a result, the American Episcopalian liturgical tradition is more “catholic” and “high church” than its English counterpart.

Until the liturgical reforms of the mid-twentieth century, most Anglicans used the 1662 Prayer Book as a matter of course. Its language and its doctrines penetrated deep into the psyches of the English-speaking peoples, and its power to win souls for Christ is widely attested. Charles Simeon, the great evangelical leader of the early nineteenth century, was converted by reading it in preparing himself to receive communion. The warnings against unworthy reception that the Prayer Book contains went straight to his heart. Simeon repented as the Prayer Book urged him to do, and he gave his life to Christ. In Africa and Asia today, the strength of the Anglican churches there is partly due to the translations of the 1662 Prayer Book, which do not sound archaic in the way that the original English version now does. Tragically, it seems that the current spiritual lethargy of Anglicanism in the English-speaking world is connected to the demise of the Prayer Book since the 1960s. However, there is still a faithful remnant that keeps its witness alive, both in the traditional 1662 form and in modern-language adaptations, and there are signs that a spiritual renewal may be developing that will influence the Anglican Communion in the next generation.

The Thirty-nine Articles are usually printed with the 1662 Prayer Book, but they have a different history. There were forty-two of them in 1552, when Archbishop Cranmer gave them to the church. A revision was made in 1559–63 by some of Cranmer’s disciples, and the number was reduced to thirty-nine, though this was not achieved simply by leaving three of the older articles out. They were rearranged, expanded in some places, and abridged in others, though it must be said that Cranmer’s articles on the millennium, originally designed to counter the Anabaptists, were omitted in the 1563 version. The Articles were given official status by King Charles I in 1628; since then they have been the accepted doctrinal standards of the Church of England. Other Anglican churches have received them to a greater or lesser degree, sometimes with revisions, as happened in the United States (1801). But not all Anglican churches recognize them, and it has to be said that most Anglicans today are scarcely aware of their existence. Even the clergy have seldom studied them, and only evangelicals now take them seriously as doctrine.

The Articles are not a comprehensive systematic theology in the way that the Westminster Confession is, but they do address questions of theological controversy in a systematic way. In that sense, they are more advanced than earlier Protestant doctrinal statements. They start with the doctrine of God, go on to list the canon of Scripture, and then get into more controversial subjects. Justification by faith alone is clearly stated, and there is also a clear defense of predestination. The sacraments are numbered as two only, and they are defined as witnesses to the Gospel. Towards the end there are articles defining the powers of the civil magistrate, along with one that sanctions the two books of Homilies, collections of sermons in which the doctrines of the Articles and Prayer Book are more fully expounded. The Homilies are almost unknown today, but they have recently been reprinted, and this may lead to a renewal of interest in them.

The Westminster divines realized that the Articles were products of their time and needed supplementing even in the mid-seventeenth century, and few voices would dissent from that judgment today. What the Articles say is fair enough, but they need to be developed further if their doctrine is going to be appreciated and used in the modern church. Whether this can be done in the current state of the Anglican Communion is doubtful, but the Articles remain a touchstone of Reformed Anglicans, and perhaps their brief and judicious statements will one day gain them greater acceptance within the wider Reformed community.